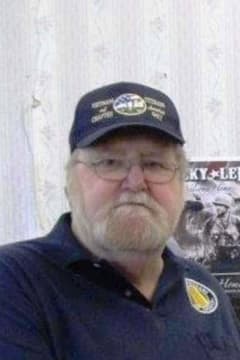 Carl E. Brown, 75, Altoona, passed away Tuesday at UPMC Altoona following an extended illness.
He was born in Altoona, the son of the late Glenn McGinnis and Vera Brown. Carl married Frances R. “Skeets” Cullen in Winchester, Virginia on July 18, 1997, she preceded him in death on December 28, 2016.
Carl is survived by his children: Shai Brown of Baltimore, Md., James R. Baker, Jr. (Kathy) of Roaring Spring, Kimberly D. Baker and Denise D. Lane (Alex) all of Altoona; nine grandchildren; eight great-grandchildren; his sister, Irma Detwiler of Loysburg; and many nieces and nephews.
He was preceded in death by three brothers: John Brown, William Beck and Roy Beck; and his sister, Anna Elizabeth Eger.
Carl was a 1965 graduate of Altoona High School. Following high school, he joined the US Navy for 20 years and served during the Vietnam War. After faithfully serving he went on to work at Family Toy Warehouse and Leighty’s Flea Market.
He was a member of the Vietnam Veterans of America-Chapter 967/Blair County. Carl enjoyed reading, trips to the casinos but especially loved spending time with his grandchildren and great-grandchildren.
Friends will be received from 5-7 pm on Friday, June 3, 2022 at The Stevens Mortuary, Inc., 1421 8th Ave., Altoona, Pa. 16602, where an honor service will be held by the Vietnam Veterans of America-Chapter 967. A funeral service will be held at 10:00 am on Saturday, June 4, 2022 in The Stevens Memorial Chapel with Chaplain Ben Chon from the James E. Van Zandt VA Medical Center. Interment will be held at Carson Valley Cemetery.
In lieu of flowers the family asks that contributions be made in Carl’s memory to: Vietnam Veterans of America-Chapter 967/Blair County, 222 Bedford Street, Hollidaysburg, Pa. 16648.
Condolences may be made at www.stevensfamilyfuneralhomes.com or Stevens Family Funeral Homes Facebook page.