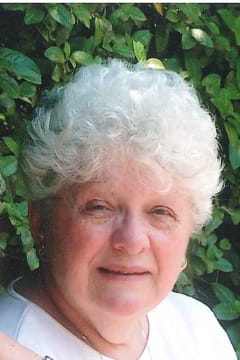 Obituary For Catherine I. Pacifico

Catherine Irene Pacifico was born at home in Altoona to Mathias and Matilda (Turek) Detterbeck. She was the youngest of three children. Catherine passed away at her residence in Hollidaysburg on Saturday. Throughout her extended illness she received extraordinary care from the women of UPMC Home Nursing.

Catherine attended St. Mary’s School and Altoona Catholic High School, Class of 1952. She walked 15th Street hill to school every day for 12 years, and she insisted that it was the best sledding hill in the city. She completed the secretarial course at ACHS and played clarinet in the marching band.

Catherine joined Bell of Pennsylvania in September 1952 and retired from AT&T in 1999, a customer service representative of the telephone co. through generations of technology advances and company name changes. She received numerous awards for her work including a national citation as service officer of the year. Catherine opened the first phone center store in Altoona. When AT&T moved her position to Pittsburgh, she commuted weekly to work in the Steel Building, returning on weekends to her beloved Altoona. During those ten years she enjoyed getting to know the city of Pittsburgh.

Catherine married Donald Pacifico in September 1955 and they were happily married until his death in March of 2013. They were an impressive couple on the polka dance floor. In their retirement, they enjoyed walking in Pittsburgh, took German language classes together, traveled to visit family and did community service work.

It should be noted that Notre Dame Football never had a more devoted fan. She listened to them with her father on the radio, attended games with her husband and daughter, and watched every televised game, even if she had to watch alone.

Catherine took a hiatus from her professional career to raise her family: daughter, Carin; son, Mark; and her sister’s children, after her sister, Alma Rimbeck, passed away in 1958: Frank Rimbeck, Marilyn Albright, Matthew Rimbeck and Donna Butz.

Catherine was a lifelong member of St. Mary’s Parish in Altoona.

Family and friends are welcome at St. Mary’s Catholic Church at 9 am, Thursday, June 23, 2022, to pay their respects. A funeral Mass will immediately follow at 10 a.m. Committal will be held at Calvary Cemetery with prayers at the gravesite.

The family requests that those who attend please wear masks due to family health concerns.

Condolences may be made at www.stevensfamilyfuneralhomes.com or Stevens Family Funeral Homes Facebook page.