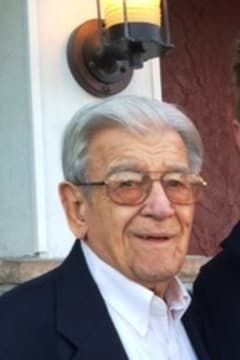 Edward (Ed) Koast, 95, Altoona, formerly of Binghamton, NY, passed away peacefully Monday, February 28, 2022 at the James E. Van Zandt VA Medical Center where he had resided for the last four years.
He was born in Binghamton, NY, the eldest child of the late John and Mary (Macan) Koast. He was predeceased by two wives: Gloria (Hattrick) Koast, to whom he was married for twenty years, and Thelma “Lee” (Robinson) Koast, married for nineteen years.
Ed is survived by his daughters: Karen Schraff (Scott) of Duncansville and Linda Koast of Hollidaysburg; two grandchildren: Jessica Sell (Corey) of Milwaukee, WI and David Schraff of Philadelphia, PA; and three nieces: Janice Biros Hirsch, Susette Biros Costes and Cynthia (Cindy) Matyas; and sister-in-law Theresa Koast.
He was preceded in death by his brother Theodore P. Koast, his sister Barbara J. Biros, and a son Douglas Edward Koast.
Ed graduated from Binghamton Central High School in 1944 and immediately enlisted in the United States Army Air Corps and served as a gunnery instructor during WWII until 1946. He subsequently earned a nursing degree from Binghamton State Hospital School of Nursing and worked as a registered nurse at hospitals in New York, New Jersey and Florida, mostly in emergency room and psychiatric nursing. He also served later in the United States Air Force from 1960-1962 assigned to military base hospitals at Carswell AFB in Ft. Worth, TX and then in Tachikawa, Japan.
Ed joined the American Red Cross in 1966 as a Disaster Nurse. His first assignment was as part of a team sent to South Vietnam to set up an international program to provide health care and education to local Vietnamese refugees of the war. After a year, he returned and worked as a Red Cross National Field Representative for central Virginia and then in Dayton, OH. In December of 1969, he was chosen to be part of a five-man Red Cross team to accompany billionaire Ross Perot on “Operation Understanding”, a non-governmental mission to gain access to American POWs in North Vietnam and provide medical and other supplies to them. He later became Chapter Manager of the Newark, NJ and Harrisburg, PA Red Cross chapters until his retirement in 1987. While with the Red Cross, he worked to help many people affected by various types of disasters including fires, floods, hurricanes and also helped to coordinate with Federal and State government officials the emergency response to the Three Mile Island nuclear disaster near Harrisburg in 1979.
He was a member of the Veterans of Foreign Wars (VFW), an avid reader and enjoyed vegetable gardening and tending to his rose bushes.
Ed lived a life of service to others and will always be remembered for touching many people’s lives. He was a strong, compassionate, caring person and a gentleman in the truest sense of the word-a gentle man.
A funeral service will be offered by the Very Rev. Protopresbyter James Dutko on Monday March 7, 2022 at 11:00 am at St. Michael's Orthodox Church, 292 Clinton Street, Binghamton, NY where the family will receive friends Monday 10:00 am until the time of the service at the church. Burial will be in the parish cemetery at the convenience of the family in the spring.

In lieu of flowers, donations may be made either to the American Red Cross or the James E. Van Zandt Medical Center-Veteran Support Fund in memory of Edward Koast.