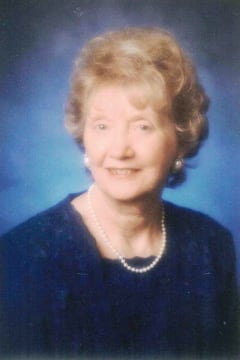 Frances Ellen Adams, 105 of Altoona, passed away Saturday at Maybrook Hills Rehabilitation and Healthcare Center.
Frances was born in Oil City, Pa, the daughter of the late William Joseph and Mary A. (Durbin) Frank. Frances married Francis Patrick Adams, Thanksgiving Day, November 27, 1941 at the Cathedral of the Blessed Sacrament, Altoona.
Frances is survived by two daughters: Patricia F. (Roger) Shingler of Altoona and Regina A. (Thomas) Piecknick of Sandy Lake, Pa; two daughters-in-law: Donna (Fedeli) Adams and Natalie (Fiore) Adams both of Altoona; nine grandchildren: William J., Patrick and Michael Adams, Carianne Finch, Jennifer Hansberry, Christopher, Scott and Deborah Shingler, Kristin Wildasin and nineteen great-grandchildren.
She was preceded in death by her husband of fifty-four years, Francis Patrick Adams and two sons: William D.F. Adams and Francis Claire Adams; a sister, Marjorie Catherine Soper; brothers: William Durbin Frank and James Ronald Frank.
Frances was a 1934 graduate of the Altoona Catholic High School Commercial Course.
A lifelong parishioner at Our Lady of Lourdes Catholic Church, Altoona. She was secretary at Our Lady of Lourdes for seven years during the building of the church. Frances served twice as Grand Regent of Catholic Daughters and was a founding member and the first President of the Altoona Catholic Sorority.
During WWII, Frances joined her husband at the Army Air Force Base in Bainbridge, GA, where she was secretary to the Base Commander for several years.
She retired after 25 years of service as executive secretary with the State Office of Vocational Rehabilitation in Altoona.
Frances attributed her long life to a life of faith and love of music. She grew up playing the violin, piano and steel guitar.
She was a forty-year member of the Altoona Chapter of the Sweet Adeline’s Chorus, elected President twice and Vice-President once.
In her lifetime she was secretary of the 12th Ward Civic Association, President of Our Lady of Lourdes PTA, thirty-five-year member of the Blair County Historical Society and for twenty years, supported the Altoona Community Theatre and Arts Foundation and Frances also enjoyed volunteering at the St. Vincent De Paul Soup Kitchen.
She loved to travel, visiting Alaska and Hawaii, road trips to the Southwest, New England, Atlantic Coast, Florida as well as Canada, Ireland, Great Britain, France, Italy, Vatican, Spain and Portugal.
Frances was most proud of her “Shining Star Club,” established as a network for her great-grandchildren; to keep in touch and support each other.
Her favorite past times were reading, crossword puzzles, playing solitaire and bridge. She enjoyed politics and discussing the state of our nation, having lived through nineteen administrations.
Frances was the matriarch of her family, who will miss her deeply.
Friends will be received from 11:00 to 12:00 noon on Saturday, Oct. 9, 2021 at Our Lady of Lourdes Catholic Church, 2716 Broad Ave, Altoona, Pa 16601, where a funeral Mass will be celebrated at noon with Fr. James Dugan as celebrant. Committal will be held at Calvary Cemetery. Masks will be required.
Arrangements are provided by The Stevens Mortuary, Inc., 1421 8th Ave., Altoona, Pa. 16602.
In lieu of flowers, the family requests that donations be made in Frances memory to: Society of St. Vincent DePaul Soup Kitchen, P.O. Box 231, Altoona, Pa. 16603.
Condolences may be made at www.stevensfamilyfuneralhomes.com or Stevens Family Funeral Homes Facebook.