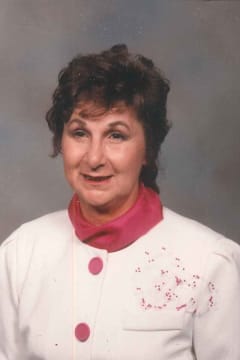 Frances K. “Frannie” Hesser
February 15, 1930 – September 6, 2021
Frances Katherine “Frannie” (Jeirles) Hesser formerly of Altoona departed this earthly life surrounded by her children on Monday, September 6, 2021. She was born in Lock Haven, PA to the late George W. Jeirles and Alice (Fetzer) Wert.
She married Lawrence R. Hesser, Jr. in Lock Haven, PA, in January of 1955, who preceded her in death in 2013. Together they had three children and are survived by: Lawrence R. Hesser III (Rimma) of Luthersville, Maryland; Lisa-Marie Lechner (Marty) and Victoria Hesser both of Altoona. A much-loved Nunnee to her four grandchildren: Martin Lechner (Sara); Teresa-Marie Thomas (Justin); Alicia Fleck (Travis Rhodes); and Craig Taylor; and five great-grandchildren: Hannah Fleck, Madison Taylor, Calvin and Willa Lechner, and Nora Thomas.
Frannie is also survived by her dear sister, Hope Knisely, of Howard, PA. Preceded in death are her late sisters, Esther Hunsinger and Ruby Weaver. She leaves behind cherished memories of her by many nieces, nephews, and friends.
She was known to friends and staff of Our Lady of the Alleghenies Residence as, shall we say, “particular”. There was only one way things were to be done the “Frannie” way! This trait served her well spending the majority of her life in Altoona raising her children and supporting her husband, an entrepreneur, building the family business, Hesser Brothers, Inc. better known as Country Garden Markets and Lancaster Foods. Frannie had many diverse interests: she had a great devotion to the Charismatic Prayer Group of the Cathedral of the Blessed Sacrament, practiced yoga for many years, loved to garden, was a leader in 4-H, and an instructor in the Confraternity of Christian Doctrine (CCD). She even dabbled in a little belly dancing for a time. Frannie with her husband had many adventures to interesting places here and abroad with their affiliation with IGA and the Navy League. Her legacy will live on in the hearts and minds of everyone she encountered.
Friends will be received from 10-11:00 a.m., Monday, September 13, 2021 at St. Rose of Lima, 5514 Sixth Avenue, Altoona, PA., followed by a funeral Mass to be held at 11 a.m. with Msgr. Michael Becker. Committal will follow at Calvary Cemetery.
Arrangements are provided by The Stevens Mortuary, Inc., 1421 8th Ave., Altoona, Pa. 16602.
As an expression of sympathy memorial donations may be made to the Cathedral of the Blessed Sacrament, Charismatic Prayer Group, Attn: Tony and Sue Conrad, One Cathedral Square, Altoona, PA 16601.
Condolences may be made at www.stevensfamilyfuneralhomes.com or Stevens Family Funeral Homes Facebook.