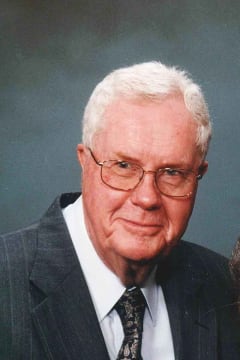 Frederick R. Lynch, 96, Altoona, peacefully passed away Tuesday morning surrounded by his family at his home.
He was born in Philadelphia, the son of the late Norman and Vera (Rinnier) Lynch.
Fred is survived by his loving wife of 70 years, Addie (Resides) Lynch; a daughter, Nadine Vogel (Bob); granddaughter, Brittany Henry (Matt) all of Manassas, VA; Grandson Brady Vogel of Dallas, TX and great-granddaughter, Hailey Henry; two very special friends that became family: Greg Simpson and Rick Smith, both of Altoona
He was preceded in death by his son, Frederick D. “Freddie” and his sister, Dorothy Thorsell.
Fred was a 1942 graduate of Altoona High School and served in the US Navy during WWII on the USS Steady, a minesweeper. As part of his enlistment, Fred trained at Bedford Springs as a radioman.
After being honorably discharged from the Navy, Fred worked for the Pennsylvania Railroad, Penn Central and Conrail for over 40 years, retiring as a senior Yardmaster.
Fred was an avid bowler, who during his prime was on three different bowling leagues in Altoona and was Bowler of the Week several times.
He was a member of the American Legion, Veterans of Foreign Wars, Bavarian Aid Society and the Caesar Batiste. Fred was a New York Yankees fan, but also loved local sports teams, including the Pittsburgh Pirates and the Altoona Curve.
Friends will be received from 10:00 am-noon on Friday, July 22, 2022 at The Stevens Mortuary, Inc., 1421 8th Ave., Altoona, Pa. 16602. A funeral service will immediately follow at noon in the Stevens Memorial Chapel with Pastor Brian Sandell officiating. Interment will be held at Alto Reste Park with military honors.
The family requests that contributions be made in Fred’s memory to any Veteran’s organization of your choice.
Condolences may be made at www.stevensfamilyfuneralhomes.com or Stevens Family Funeral Homes Facebook.