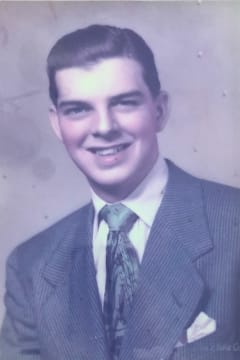 On the afternoon of Sunday, September 19th, 2021, longtime Altoona and Baltimore resident, Joseph (Joe) Hesser left this world for the next just in time to celebrate his 66th wedding anniversary in heaven with the love of his life, Fannie B. Hesser, who preceded him in death while holding his hand just a month prior.

Notable as an equally right-brained and left-brained thinker and doer, Joe was an original mastermind and businessman who spent his life bringing first-to-market food concepts to the wholesale and retail marketplaces with his companies including Hesser Brothers Produce, the popular Country Garden Markets and Country Garden Six-Pack Shops, and Lancaster Foods headquartered in the Baltimore- Washington corridor which today ranks as one of the largest food distributors in the eastern United States.

Kind, generous and good humored, Joe also cared about his hundreds of employees and their families as though they were part of one big extended corporate family.

Joe was the youngest child born to Isabelle (Luther) and Lawrence (Hug) Hesser I, in the fall of 1931. True to his German heritage, Joe had a fondness for good food, dogs, horses, beer, the countryside, and beautiful gardens. He enjoyed his regular poker club, business reading, ocean swimming, bike riding, road trips, and overseas travel alongside his wife Fannie, and many friends and family members.

Joe was a United States Army Veteran who served during the U.S. Occupation in Japan. He was President of the Blair County chapter of the US Navy League. He also served as President of the Altoona Area Chamber of Commerce, and was a member of the Rotary Club, and St. Rose of Lima Church. He was a lifelong contributor to many regional and international charities.

His legacy will forever be an incredible inspiration to all who were lucky enough to know and love him. He leaves behind three daughters and their husbands, ten grandchildren and their spouses, and four great-grandchildren; Katie (Dr. John) Lesica, Maile (Tom) Holman, August & Lawrence Holman, Jon (Erin) Lesica, Bennett & George Lesica. Mary Brooksbank, Cassie, Bonnie, Mandi, Tommy, Josette and Andrew Brooksbank, and Amy (Rob) Carrara and Connor and Campbell Carrara.