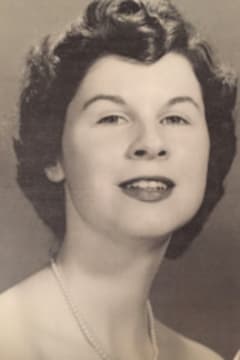 Mary Alice (Patton) Plummer, 91, Altoona, passed away peacefully on Thursday, July 8th, 2021 after a brief illness.
She was born March 25th, 1930 in Springfield, Illinois, daughter of the late Alice (Cullen) and Roosevelt Enoch Patton. On Oct. 13, 1956, she married Raymond James
Plummer of Altoona, in Springfield, Illinois.
Surviving are her three daughters: Dr. Alice Joyce (The Honorable John Joyce, MD), Julia Plummer Schokker, and Elizabeth Plummer McGoldrick; seven grandchildren: Maj. Dean (Lindsey) Mathis, Christopher (Trisha) Mathis, Sean (Natalie) Joyce, Elizabeth and Daniel Joyce and Dr. Mary McGoldrick (fiancé Dr. Matthew Tobias) and James McGoldrick; seven great grandchildren: Natalie, Shane, Samuel, Evelyn, Josie, Cora and Genevieve; a sister-in law, Jeanne (Riley) Plummer of Hollidaysburg; and many nieces and nephews.
She was preceded in death by her husband Raymond, a brother, Cullen; sisters, Janie (Dick) Schoenberger, and Peggy (Bob) O’Shea; and two sons-in-law: Dr. Johannes Schokker and Donald McGoldrick.
Mary Alice was a 1952 graduate of Trinity College in Washington, D.C. with a Bachelor of Arts degree in French and a minor in History. Upon completion of college, she received a scholarship to Curtis Institute of Music in Philadelphia to study Voice. In 1956, she met Ray, the love of her life, at an audition in Pittsburgh for the Light Opera Company and they made beautiful music together for 62 years. It was not unusual to have her Curtis friends like the Guarneri Quartet and Anna Moffo perform at her home when they visited Altoona. Mary Alice shared her talents widely as she taught voice, piano, and music theory to many pupils in Altoona for several decades.
She was a member of Blair Civic Music and the Blair County Historical Society and volunteered for Meals on Wheels. She loved performing in the beautiful setting of the Baker Mansion with her family. A fan of Altoona Community Theatre, Mary Alice
delivered two show-stopping performances with ACT as Kate in “Kiss Me Kate” in 1963 and as Mother Abbess in “Sound of Music” in 2009. Mary Alice and her husband Ray sang together for many recitals, fundraisers and benefits including recitals in Detroit, Beijing and Russia. The duo sang everything from opera to showtunes, thrilling audiences, friends, and family with the combination of her beautiful soprano and his robust tenor. With her deep devotion to the Catholic faith and to her late husband and her three daughters, Mary Alice lived a life full of books, music, laughter, and love.

She was adored by friends and family for her kind heart, quick wit, historical perspective, and endless musical talent.
Friends will be received from 3 to 6 p.m. Sunday, July 11, 2021 at The Stevens Mortuary Inc., 1421 Eighth Ave., Altoona, where a vigil for the deceased will be held. A funeral Mass will be celebrated at 10 a.m. Monday, July 12, 2021, at the Cathedral of the Blessed Sacrament, Altoona, Monsignor Stanley Carson celebrant. Committal will be in Calvary Cemetery, Altoona.
In lieu of flowers, memorial contributions in Mary Alice’s memory may be made to the Blair County Historical Society (Baker Mansion), 3419 Oak Lane, Altoona, PA 16602.