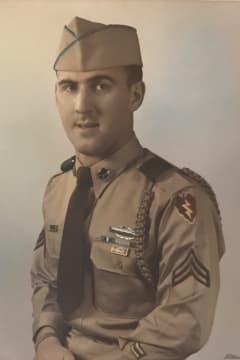 It is with the deepest sorrow that the Gegenfurtner Family must announce the passing of Walter R. Gegenfurtner; beloved Husband, Father, Grandfather, Uncle and Great Uncle, on September 9th, 2021 at the age of 90 years old in Altoona, PA. He was surrounded by his loving family and will be missed by us all. He was born the only son to parents Rudolph and Elizabeth Gegenfurtner of Altoona, PA. He was an avid reader, a student of history and politics, a sports enthusiast, loved meatloaf and mashed potatoes and chocolate ice cream, and a TCM movie fan. As a result of having a large library of all types of books and staying up to date on current events, he had the uncanny ability to be able to discuss and have an intelligent opinion on all subjects. He always looked forward to the next day and whatever life had to offer. Always had a nice word to say about everyone, always had a positive attitude, worked hard, and never let his Family down. Loved life and being with his family and his extended family by marriage. Was a continuous role model through his actions and deeds. His Compass was always pointed North and it never swayed or faltered no matter what. The World feels very empty today.
He attended St. Mary’s Grammar School where he and his School Teams consecutively won three Basketball Championships and three Baseball Championships. He was one of the original “Flying Dutchmen” dubbed the name as a result of how fast the way he and his Teammates (of German descent) ran the base paths. A painting of the “Flying Dutchmen” remains till this day in the front lobby of St. Mary’s School. At St. Mary’s he was also an Altar Boy and participated in the Boy Scouts. He later attended Roosevelt and Altoona High Schools where he played Football, Basketball, Baseball, and ran Track; and then graduated Valedictorian of his Class.
After High School he went on to serve in the US Army and Airborne on the frontlines during the Korean War. Besides receiving an Honorable Discharge, he was awarded the Combat Infantryman Badge, the National Defense Service Medal, the Korean Service Medal with 1 Bronze Service Star, the Good Conduct Medal, and the United Nations Service Medal. After being discharged from the Army, he enrolled in Penn State University and graduated at the top of his class.
Walter then married Betty J. Gibson of Altoona, daughter of John C. and Bertha Gibson. They were happily married for 57 years until her death in 2013. After being just married, they moved to Jersey City, NJ, where they spent the next 40 years building a new life and raising a family of three sons in the Parish of St. Aedan’s. He belonged to the St. Aedan’s Grammar School and Hudson Catholic High School Men’s Clubs where all his Sons attended. He was a big supporter of the Basketball, Soccer, Baseball, and Track Programs for each School; as well as the local Little League. Walter retired as the General Manager of the G.T. Lawe Stores of New York. Upon both of his and Wife’s retirements, they moved back to Altoona, PA to spend time with family and re-connecting with old friends.
He spent the remaining 24 years enjoying time with his three sons, three grandchildren and Daughter-in-Law, attending various sporting events and recitals for his many Great Nieces and Nephews, going to the Curve games, attending Little League and Softball games, Altoona and BG High School Basketball and Football games, volunteering with local organizations, traveling, and belonging to the Holy Rosary Parish and the Unter Uns Social Club.
Walter is survived by his three Sons, Joseph, Andrew, and Matthew; Matthew’s Wife Trish; and his three Grand Children Matthew James, Nicole, and Emma. He is also survived by his Sisters-in-Law Johann (Gibson) and her husband Thomas Shade, Mary Alice (Gibson) and her husband John Conte, and many more nephews, nieces, and great nephews and nieces. He is also survived by his Best Friend of 83 Years since the First Grade at St. Mary’s School, Herman Frederick and his wife Ruth Ann.
He is also pre-deceased by his wife Betty J. (Gibson) Gegenfurtner, parents Rudolph and Elizabeth Gegenfurtner, Sister-in-Laws Christina Gibson, Kathleen (Gibson) McConnell and her husband Harold McConnell, and Brother-in-Law John T. Gibson and his wife Patricia (Irwin) Gibson.
Due to Covid-19 concerns, the viewing will be strictly for the family only. However, a funeral Mass will take place at Holy Rosary Catholic Church, 900 N. 4th St., Altoona, Pa. 16601, on Saturday, September 18, 2021 at 1:00 P.M. The Services will then conclude at Calvary Cemetery with “Full Military Honors.” Masks will be required for both events.
In lieu of flowers, please make donations to either the Altoona Area Public Library, 1600 5th Ave., Altoona, Pa. 16602 or your local Boys Little League and/or Girls Softball Leagues.
Arrangements are provided by The Stevens Mortuary, Inc., 1421 8th Ave., Altoona, Pa. 16602.
Condolences may be made at www.stevensfamilyfuneralhomes.com or Stevens Family Funeral Homes Facebook.