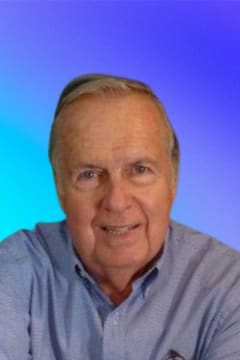 Bill was born in Altoona on November 24, 1934. He was a 1952 graduate of Altoona Catholic High School. In 1957, he joined the US Army National Guard, serving for six years. Bill married his wife Colleen in June 1964, recently celebrating their 57th wedding anniversary. He retired from Conrail in 1995 after more than 30 years of service. Bill was a member of Our Lady of Mount Carmel Catholic Church. For many years, he was an active member of the Jubilate Deo sacred choir. A lifelong supporter of the arts, Bill was an avid attendee of the Altoona Symphony and enjoyed following professional tennis.

A devoted husband and father, Bill enjoyed sharing his home with family and friends, as well as the company of his beloved cats Beauty and Colton. He was preceded in death by his parents Mary Madeline and William Jennings Lumadue. He is survived by his siblings Mary Helen Eakins, Virginia Hart, Patricia (John) Gebhardt, Richard Lumadue, and numerous nieces and nephews; his children Jeanine (Kenneth) Womack, Paul Lumadue (Kenneth Smith), and Steven Lumadue; his grandchildren Justin Lumadue (Mona Dooley), Ryan (Chelsea) Harshbarger, Rebecca (Peter) Moran, and Victoria Harshbarger; and great grandchildren Emma, Landon, and Aiden Harshbarger.

The family is holding a public viewing at The Stevens Mortuary, Inc., 1421 8th Ave., Altoona, Pa. 16602 on Wednesday, September 29th, from 2-4 PM and 6-8 PM. A funeral Mass will be celebrated at Our Lady of Mount Carmel Catholic Church on Thursday, September 30th, at 10:30 AM, followed by committal at Calvary Cemetery in Altoona.

Condolences may be made at stevensfamilyfuneralhomes.com or the Stevens Family Funeral Home’s Facebook page.